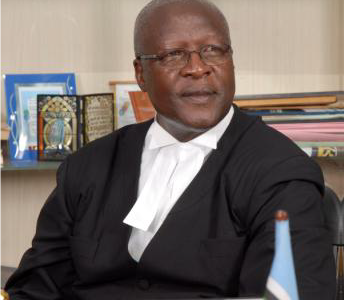 On the 20th June 2020 the HON. BART MAGUNDA KATUREEBE will step down as Chief Justice of Uganda. After five years of devoted service to this role we wish to celebrate his contribution to the rule of law.

The Hon Bart Katureebe is an accomplished leader who has served in the Government of Uganda in various capacities: Deputy Minister of Foreign Affairs in charge of Regional Cooperation (1988-91); Deputy Minister of Industry and Technology (1991-92); and Minister of State for Health (1992-96). From 1996-2001 he was Minister of Justice and Attorney General.

During his tenure as Attorney General, he represented Uganda at the International Criminal Court of Justice at the Hague in a case where Uganda was accused of plundering the natural resources of DRC among other complaints. He also appeared in the Supreme Court on behalf of the government to successfully challenge Gen David Tinyefuza’s victory in the Constitutional Court.

Between 1993 and 2001 The Hon Bart Katureebe served in the legislative branch of government as representative of Bunyaruguru County, Bushenyi. He was a Constituent Assembly delegate that made Uganda’s 1995 Constitution (1993-1995) and Member of the 6th Parliament (1996-2001).

In 2001, The Hon Bart Katureebe returned to private practice and became one of the founding partners of Kampala Associated Advocates, a renowned and leading law firm based in Kampala. Chambers Global named him one of Uganda’s leading lawyers in 2004. He also served as Board Chairman of the Vision Group (a media company) and served on the Standard Chartered Bank Ltd’s Board of Directors. In July 2005, President Museveni appointed The Hon Bart Katureebe as a Supreme Court Judge where he served for ten years before becoming the Chief Justice. In 2006, he agreed with other members of the Supreme Court panel that upheld the outcome of that year’s presidential election.

During his tenure as Chief Justice, Hon. Bart Katureebe has spearheaded a number of reforms in the Ugandan Judiciary including, among others, establishment of an Electronic Case Management and Information System, institutionalizing Alternative Dispute Resolution Mechanisms, ensuring a strengthened Judiciary culminating in enactment of the Administration of the Judiciary Act.

The Hon Bart Katureebe ensured Uganda was a founding Member of SIFoCC from its first meeting in London in 2017. At SIFoCC’s second full meeting, in New York in 2018 he gave the keynote address at the New York Federal Reserve. Throughout he has championed collaboration between judiciaries, the importance of training and case management, and the sharing of best practice between courts. He nominated Uganda’s judge to participate in SIFoCC’s first judicial observation programme.  We are delighted that he remains on the SIFoCC Steering Group.

On behalf of the SIFoCC steering group and all members of SIFoCC, we would like to wish him a happy and blessed retirement.