To celebrate International Women’s Day interviews have been carried out with two esteemed SIFoCC member judges.

You can listen to Senior U.S District Judge Loretta Preska share her experiences in the video below.

Read on to hear Federal Justice Pathmanathan give her insights on being a judge in Malaysia. 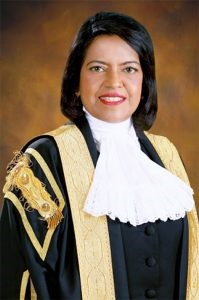 Can you tell us about yourself?

My name is Nallini Pathmanathan and I am a judge of the Federal Court of Malaysia. That is the highest co

urt in Malaysia. The equivalent would be the Supreme Court in the United Kingdom.

In the Federal Court we are expected to deal wit

h all matters on appeal before us. (However at least one specialist judge will sit on the panel).

My area of interest is commercial law, as that was my area of practice before I joined the Bench. More recently, I have enjoyed adjudicating on constitutional issues, which are more prevalent at this level.

The judiciary in Malaysia enjoys close links with the United Kingdom and its judiciary. Our system of law is established on the common law system, although we have a written constitution. We also have a Syariah (Shariah) system of law. Our Federal Constitution provides for the manner in which these two systems of law operate.

The judiciaries in the United Kingdom and Malaysia interact to a considerable degree at international fora on various areas of the law. A great deal of this interaction can be attributed to the fact that many Malaysians study law in the United K

ingdom. This has been the case for several decades and continues today. The links made through the Inns of Court in the United Kingdom remain a strong factor in cementing the relationship not only between the judiciaries but also the Bar.

I personally interact with judges from the United Kingdom via the Standing International Forum of Commercial Courts. I am also the Chairperson of The Malaysian Middle Temple Alumni Association which maintains strong links with Middle Temple.

How did you become interested in the law? What was your career progression?

I never contemplated law as a career. I had always focused on medicine as many members of my family did, and continue to practice in that field. However, I was not successful in my attempt at medicine, and that resulted in my pursuing a degree in Physiology instead, from the University of London. My late father then suggested that I con

sider pursuing the graduate diploma in law course, which I did at the University of Westminster. I enjoyed the law the minute I started the course. I was then called to the Bar at Middle Temple, after which I returned to Malaysia and commenced legal practice at a firm known as Skrine. I remained in practice for 23 years, after which I was invited to join the Bench. In the course of my legal practice I covered a wide range of areas, including matrimonial law and industrial and employment law before moving into commercial law. I enjoyed my time in practice, although it must be said that it was difficult to penetrate the commercial field. It was my work in employment law that allowed me to eventually obtain briefs and build up my portfolio of commercial cases.

Did you face any obstacles to becoming a judge in Malaysia?

I did not. In point of fact, I believe I was invited because there was a need for diversity in the judiciary. In that context, I was the first female

Malaysia is a plural society and diversity is an important component contributing towards racial harmony. I found the members of the Judiciary to be very welcoming. That camaraderie has continued throughout my judicial career.

What are the best things about being a judge?

The independence and freedom to adjudicate on the cases before me. Independence not only in terms of freedom from influence, but the ability to study, absorb and analyze the law, be it statute or case-law from Malaysia and numerous other jurisdictions. This aspect of being a judge allows one to continually expand and evolve one’s ability t

o question, evaluate and study. Sitting with other judges for appellate work enhances this experience by reason of the diversity of views encountered. In every case, one aspires to reach a legally rational and coherent solution that is comprehensive.

Of equal satisfaction is the ability to marry the law with the very human issues and problems that arise for litigants in every case.

How do your friends and family feel abo

ut you being a judge?

My family and friends are pleased and proud about my having become a judge. The community at large is also pleased, I think. I am fortunate to have always received encouragement and support from my husband and son on this front.

How do you think things have progressed for women in the judiciary since you became a judge?

Malaysia has always been unique in that women have for some considerable time since the 1960s been appointed to the superior Bench. In the subordinate courts, women have also always featured. Since the early 2000’s however, the number of women on the Bench has increased tremendously. At present there are 14 judges sitting in the Federal Court, which is the apex Court. Of the 14, 8 are females. Our Chief Justice, The Right Honourable Tengku Maimun binti Tun Mat, is female, as is the President of the Court of Appeal (t

he equivalent in the United Kingdom would be the Master of the Rolls).

The numbers are equally high in the Co

urt of Appeal and the High Court. We do not have a problem with gender diversity as the number of women in the Malaysian judiciary comprise almost up to half of the judges in the country. The moot question would be – who is the endangered species – men or women?

In summary things have progressed very well for

women in the judiciary given the fact of our Chief Justice and the President of the Court of Appeal being female. They were appointed to these positions in 2019 and 2020 respectively.

Why do you think celebrating International Women’s Day is important?

It is important to celebrate International Women’s Day because it remains a fact that historically women have been, and continue to be, systemically marginalized by a system that is premised on the notion of male supremacy. This premi

se presupposes that the male gender is “superior” physically and mentally, and thereby actively excludes and suppresses women from leading roles in politics, economics and the workplace in general.

Although matters have progressed positively for women over the course of the last few decades, it remains a fact that women still experience the negative effects of systemic discrimination. The accomplishments o

f women who have pioneered many major fields have been largely overlooked, and remain unrecognised to a sign

The fundamental accomplishments of women on a day to day basis, whether in the home or at the workplace need equal attention and celebration as their roles are, in many parts of the world, simply overlooked.

Therefore, International Women’s Day celebrates, not merely the success of the female gender, but serves to accentuate and draw attention to the often-unacknowledged role that women have played, and continue to play, in shaping society.

In a world where people are programmed to view matters through the lenses of men, this is an opportunity to dispel such pre-conceived and mistaken perceptions of how women have actually contributed to society.

Have there been any women who have inspired you throughout your life/career?

I am unable to identify any one woman or women specifically. Both females and males in various fields have been inspirational. Great judges from many countries who have espoused the fundamental principles of the law and developed them to meet the challenges of the everchanging face of the law have, and will always continue to provide inspiration through their judgements.

At my age, I have learnt, with difficulty, that adulation of an individual is rarely justified. We truly are mere mortals. It is preferable to learn from facets or habits of personalities, or stages of people’s lives, where their best qualitie

s have come to the fore, and to try and emulate those qualities, or achieve those goals oneself. You remain the ultimate judge of your own worth.

What does being a woman in the Judiciary mean to you?

That is a difficult question to answer, because gender has not posed an obstacle in the course of my judicial career, thus far. Nor does gender define me as a judge. Interestingly enough, gender posed more of an obstacle at the Bar, in my time, than it does in the Judiciary.

However, I believe that as a woman in the Judiciary I provide a degree of diversity of thought, approach and mindset that contributes towards more expansive and hopefully, more progressive judgements.